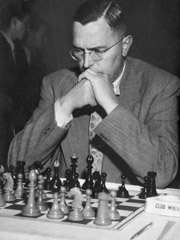 The Netherlands have brought forth one Chess world champion, Dr Max Euwe. When, in 1935, world champion Aljechin lost his title to Euwe, the former Russian citizen spoke these memorable words: “Es lebe Schachweltmeister Euwe“. The Dutch were delirious: in the streets celebrations went on deep into the night.

Euwe had already done much to promote chess; he was to do even more. As president of the World Chess Federation (FIDE) he advanced chess immensely, also in third-world countries. Euwe, himself an excellent chess teacher, wrote many books and articles and made an essential contribution to chess theory.

Euwe died in 1981, eighty years old. Soon after his death the Foundation Max Euwe-Centrum was founded to commemorate Euwe, his work and his significance to chess. This led to a highly tangible result; in November 1986 the Max Euwe-Centrum opened its doors.

Initially the centre directed its energies towards maintaining a small museum and a modest library which contained part of Euwe’s chess inheritance and his books.
The following years were characterized by an explosive growth in all areas.

MEC’s current aims and objectives are rather different from those in the initial stages of its existence. Of course one of its aims is still to promote chess. Certainly attention is being paid to technical aspects in courses and training sessions. In addition, however, there is ample interest in the cultural, social and academic aspects of chess. This somewhat less well-known side is illuminated in lectures, seminars, exhibitions and conferences. And let us not forget the link with computer sciences.